Blogoween #13: Trapped With You-Characters I'd Want to Protect Me in a Haunted House! 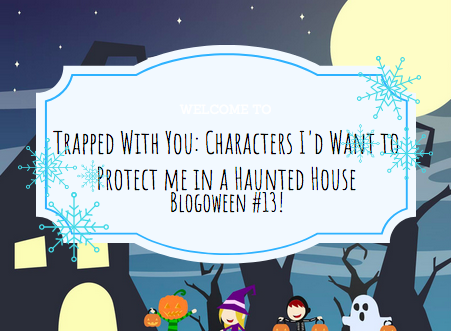 Hey guys! It's the very last day of Blogoween! 😩 Are you guys sad to see it go? It's been fun linking up and sharing these fun posts all month, but I think I'm ready for a break, though I'm still in denial that fall apparently is over for me. It really feels more like Christmas Eve outside with all of the snow we got! 😂 But I'm excited to move on and work on some other projects I have going on for the last couple months of the year.

Anyway, today I am doing Clo @ Book Dragon's prompt, Trapped With You, where we pick fictional characters we would want to have on our side if we ever got trapped in a haunted house! 😱 I think I have a pretty good list.

*Stick around at the end of this post for my reveal of the killer all the back from Blogoween #5, An Evening of Mystery and Murder! (Wow that feels like a long time ago! 😂)

1. Katniss from The Hunger Games

Katniss would protect me with her awesome bow and arrow that she uses in Mockingjay with the exploding arrows! That oughta take care of some zombies. 😂

2. Megan from The Reckoners Trilogy (SPOILERS for Steelheart!)

Megan loaded with her precious guns, her powers, and a bad attitude is definitely a force to be reckoned with. She could use her illusions to shield us and confuse whatever demon/zombie/serial killer is after us by making false hallways and doors. Or you know, she could send them or us into another dimension so we can escape! And if all else fails...she'll just shoot them. 😂

Now Mare wasn't my favorite character in Glass Sword, but I'm not gonna lie, if I were in danger, I'd want her lightning powers on my side. It would be pretty satisfying to watch her fry a murderer into a crisp. 😂

I know this is Thor, but my friend made me see this movie even though I'm not that into Marvel. But it makes me think of Mare in the arena scene at the end of Red Queen every time! This is totally how I imagine what it was like when she got her powers back. 😄

4. Charlotte from A Study in Charlotte

She's the descendant of Sherlock Holmes, so I feel like she'd outsmart the killers or creatures chasing us pretty easily...probably by somehow proving that they are all just people wearing masks like in Scooby Doo or something. 😂

5. Alosa from Daughter of the Pirate King

Who wouldn't want a pirate to help them fight bad guys? She could teach me how to sword fight and then we'd go off and cut the heads off the creatures trying to kill us...and have fun and look fabulous while doing it. 😉 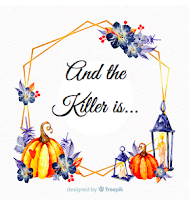 Peter talked on and on all through dinner about his girlfriends and how great and handsome he was, but unfortunately, it wasn't the best company to brag to, since characters of questionable morals tend to get annoyed and jealous very easily. 😂

Werner, Amy, and Charlotte were trying too hard to cling to their good sides to actually kill him, though I'm sure they fantasized about it. But Charlotte would do more than fantasize. She argued with him and told him off all through dinner and provided great examples of why he (and really everybody else too) is a complete idiot.

Warner and Maven were planning to actually kill him, but Lyra just happened to beat them to it.

Lyra used her siren powers to lure Peter to the library and used the dagger to stick it straight in his heart, because if she just ripped his heart out with her hands like she would normally do, it would obviously point straight to her, since that's what she is known for.

Lyra killed him because his arrogance and humanness annoyed her so much. And honestly she knew he would be the easiest target and she did it just to prove she was powerful. Let's just assume this is before she met Elian, ok? 😂

And of course Charlotte was the one to easily solve it, knowing that Peter wasn't the type of guy to normally spend his time in a library willingly, and the fact that there were no defense wounds, easily pointing her to Lyra and her siren song. Being the descendant of Sherlock certainly has its perks. 😉

So that was kick-butt-haunted-house-defense-squad! 😂 Do you like my choices? Who would you have picked? And what do you think of Lyra being the killer? 😱 Did you guess right?

Thank you so so much to Clo and Sam for hosting Blogoween, and thank you for reading, I had a lot of fun! Til next year! Bye! 🎃