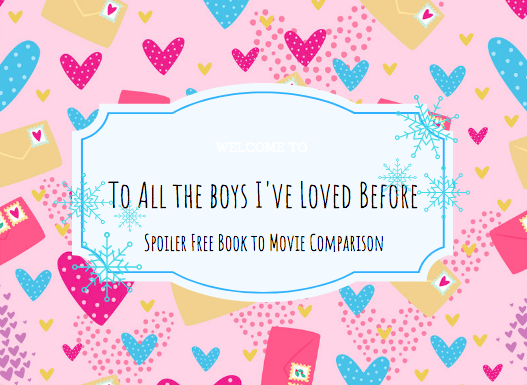 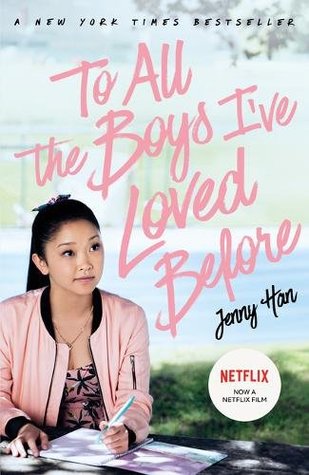 Hey fellow book nerds! Today I am reviewing the book and movie adaption of To All the Boys I've Loved Before by Jenny Han, and I've got some frustrating mixed feelings about this one, so read on to find out my thoughts! 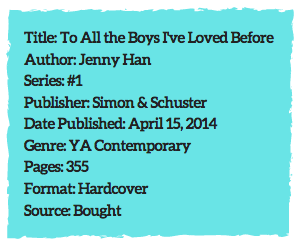 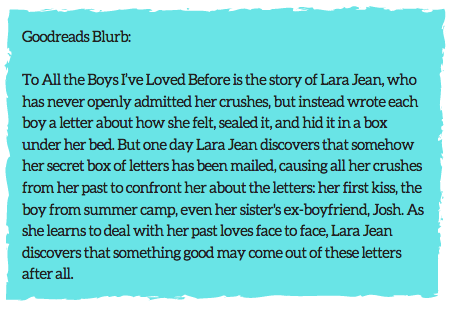 Sigh. Okay there's going to be a rant coming, so prepare yourselves: I really did like Lara Jean. I really related to her and her introversion and shyness and creativeness. I loved her family, and I even liked Josh.

But, Chris, Gen and Peter annoyed the heck out of me! Chris and Gen are minor enough characters, but I really still cannot stand Peter. I don't understand why everybody is so in love with him. I knew right away that Lara Jean would end up with him, and that made it so hard for me to get through the book. I just thought Peter was such a jerk and even though he changes towards the end, I still found it hard to trust him that he really loved Lara Jean the way she was. I found myself actually agreeing with Margot and Josh that she was too good for him and he was too much of a player when I was like 70% into the book when I should have been rooting for their relationship way before then. Also I just never felt like the book ever gave a good enough reason to like Peter more than Josh.

I really just can't stand guys like Peter, and because I saw so much of myself in Lara Jean I couldn't understand her decisions that she made throughout the book and it was just very frustrating for me not to be able to ship the romance, because that's what basically the entire book was about.

In Peter's defense, the movie did make him look just a tiny but better. He seemed a little nicer from the start and less of a jerk, but I didn't think we got to see the good things about Lara Jean's character very much in the movie. She seemed a little more annoying in the movie for some reason to me. Also Margot was kind of cold and callous to the point where it was frustrating, unlike in the book. But, one little good thing is I liked Kitty, though I think they casted her way too old, but the scenes with her in it made me laugh.

In both the book and the movie I feel like there isn't really anything special to say about the settings. It felt like a typical YA contemporary, but the little things that did stand out to me is I liked the warm and loving feel of Lara Jean's house, and I liked how friendly and homey her neighborhood felt in the book. The recital party scene near the end was fun to read about because all the food and the Christmas vibes and I'm really sad that they didn't include it in the movie.

I really had a hard time getting through this book. It didn't really pick up until about 60 pages in, and for a while I didn't really know what the whole point of the plot was. The writing itself was okay, I liked the food descriptions and all of the cute scenes with her family, but the plot seemed to meander a little in the beginning and it got a little frustrating. And I really just couldn't get behind the romance, and since that was the part of the plot, I just really didn't enjoy it. Also I hated that the drama that Lara Jean caused almost destroyed her relationship with Margot, and they way all of that was resolved in the end seemed a little rushed and sloppy to me, which also made it seem a little unrealistic.

The movie was a little better, in terms of length. I hope it would translate better on screen for me personally, and it did a little bit. It made Peter a little more bearable, and of course it was easier to get through because it's a movie and take a lot less time and effort. But unfortunately, since it was a short movie, only an hour and a half long, it felt very rushed and they cut out almost all of the scenes that I actually liked about the book, and changed a lot of things, including the ending, which was disappointing.

Well, I already complained about Peter specifically above, so I won't repeat myself with that. But, a huge issue I had in the book is that I didn't like how it seemed like Chris and Peter were practically shaming Lara Jean and saying she isn't cool enough and that she's boring because she likes to do introverted things like baking and knitting on a Friday night.
NOT EVERYONE HAS TO GO TO RAGING PARTIES TO HAVE FUN AND FEEL FULFILLED IN LIFE. COME FREAKING ON PEOPLE!
People are different! They like different things! Why couldn't they just respect Lara Jean and let her like what she likes and think what she thinks? But nooo everyone pretty much pressures her into going to a party she doesn't want to go to. Even her dad! Even in the movie her eleven year old sister thinks she's sad and there's something wrong with her just because she'd rather stay home. That DOES NOT necessarily mean she doesn't "have a life!" Seriously, people. Our society needs to get away from that kind of thinking. It seriously infuriates me. And I just think that Peter tried to change her too much and I was just not okay with any of that.

I realized I basically only read this book because it's popular and my friend wanted me too. I hoped I would like it as much as everybody else, but sadly that's just not what happened. The romance got way too in the way of what I thought should've been a little more important; the relationship between Lara Jean and her sisters, but oh well. That's just my opinion.

This book really just was not for me. It was too much of the kind of drama I don't enjoy reading, and I really just don't understand why this series is so hyped, but I guess it's because everyone approves of Peter, which I just don't understand. I wanted to DNF this book so many times, but though annoying, it was easy enough to read and less than 400 pages so I decided to just stick with it. Mostly because I did want to see if it was going to get any better and I wanted to accurately compare it to the movie. I honestly wanted to give this book 2 1/2 stars just because it really isn't my kinda book, but after I watched the movie I decided to round it up to 3 for both of them to be nice.

Well that was my thoughts on TATBILB. Do you agree with me? Or are you ready to come at me with pitchforks? 😂 What's a hyped book that didn't agree with you, and what's one you love that nobody else likes? Let's discuss in the comments!

Normally I'd say here that I'll see you on Tuesday with a new post, but I decided to skip this Tuesday and take a mini hiatus so I can focus a little bit more on prep for Blogoween! So I will be back next Saturday the 29th with my book club book review of Scarlet by A.C. Gaughen! Bye! ♡