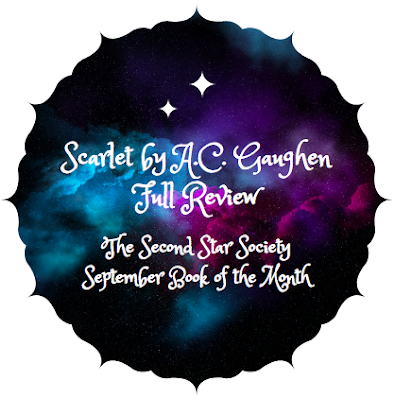 Hey guys! I'm back with another review! I know, I realized I've done a lot of reviews recently, but this is the last one for a while. I promise! 😂 But this month I read Scarlet for my Robin Hood retelling for The Second Star Society, so read on to hear my thoughts! 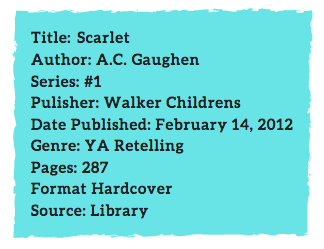 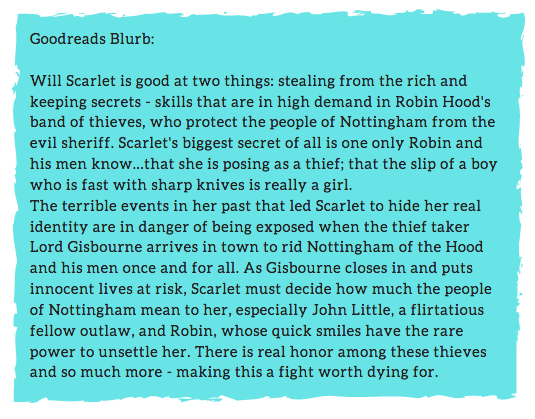 I really enjoyed Scarlet's character. I loved the way she was written and how the author used a really distinguishing voice for her in her narrative. It was so fun and interesting to read and I loved how the way she spoke and thought played a big part in the story. I also enjoyed the parts that more minor characters, like the other members of their band of thieves and the townspeople, played in the story.

The setting of England in Robin Hood's time was so cool to read about! I don't know much about Robin Hood; I've only seen a couple of movies, but I don't think I've ever read a retelling of it. It was fun to read about the Sherwood Forest and all the surrounding towns where Scarlet, Robin, and their band helped the starving people that lived there.

I didn't really have any problems with the plot that I can think of, but I was trying to read this book pretty quickly since I decided to finally put my library card to good use and get my copy of it there. I do remember thinking it was really interesting reading about all of their heists and prison breaks. I don't remember ever being really bored, and at one point towards the end I found myself worrying for the characters a little bit because I wasn't exactly sure how it was going to end.

There was a plot twist about Scarlet that I found a little predictable, but I actually don't think I am the best person to judge since I think it was just because I kind of spoiled myself for it by reading the author's note in the back (Which was really fascinating btw. If you ever read Scarlet, you shouldn't skip out on reading it!) before reading the actual story first. 😳 But I didn't really realize it was going to be that much of a spoiler when I was reading it until I actually got to that point in the book and I was thinking: "Oh, I think that was supposed to pack more of a punch...oops." So I'm pretty sure that it was mostly my fault. 😂

Something I really really loved about this book is how surprisingly feminist it was! It was so interesting reading the author's note about how she researched all the legends of Robin Hood and Will Scarlet and realized it's plausible that Will Scarlet could've actually been a girl. Because people were so sexist back then, they could've very easily lied and changed the story and said that she was a boy because it was so long ago that when the legends were just starting out, it was mostly passed on by word of mouth. I just found that so fascinating and I loved how she used it to give depth to Scarlet's character by describing the rough things she might've had to deal with.

There were only a couple of things I wasn't sure I liked about this. The romance was kinda confusing for starters. It was kind of a love triangle but also kind of...not? I don't even know. I had no idea who I was supposed to root for most of the time, and honestly it just would've been a lot better if it wasn't trying to be so cliche and the romance took more of a backseat. I mean I've read worse, but it was just...confusing.

And also the ending seemed to be just a little abrupt? I just didn't like how they all just kinda left the battle pretty much in the middle of it and left John there to fight by himself, and then we had to hear how it ended from him later, when he wasn't even the main character. It was just kinda strange.

Overall I did really like it. I loved Scarlet as a character and all of the thieving and daring rescues and the Robin-Hoodiness of it all. 😂 I wasn't sure going into it if I would like it enough to continue the series because I wasn't sure what to expect, but I'm glad I did like it, because I really want to know what happens next and spend more time with these characters. 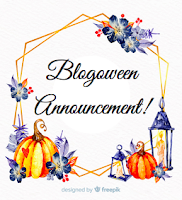 Hey! I just wanted to stick my head in here at the end and explain a little bit how my schedule for Blogoween is going to work, since I realized I haven't explained it yet and I wasn't sure where else to put it. 😂

Blogoween has levels, and I am doing #1, which means I will be posting 13 nonconsecutive bookish fall and Halloween themed posts throughout the month of October, starting the 1st!

Since my regular schedule is on Tuesdays and Saturdays and I also have a few non-Blogoween related posts already scheduled in October, I tried to make all my posts as evenly spaced as I could, but it may seem a little random. I need to fit in all 13 of my Blogoween posts, so I'll need to post on some extra days. I tried to make it seem as least random as I could, but just so you are aware, for the month of October I will still be posting every Tuesday and Saturday, as well as every Thursday, Mondays the 1st and 15th, and Wednesday the 31st; Halloween Day. 😄

I really hope this makes sense and will help avoid some confusion, but I'm excited about Blogoween and I hope you are too! Thanks for reading!

Have you read any good Robin Hood retellings? If you've read Scarlet, what did you think of it? Have any good recommendations? Let me know!

I'll be back tomorrow to kick off the start of Blogoween! Are you as excited as I am? 😄👻