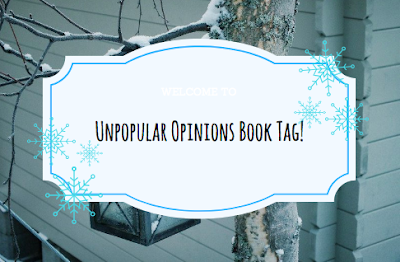 Hey Book Bloggians! Today I am doing the Unpopular Opinions Book Tag, created by The Book Archer! This tag has been pretty popular on YouTube in the last few years, and I have waited a loooong time to finally do it, so here it is! 😄

A Popular Book or series that you didn't like:

I almost DNF'd this so many times. 😑 I didn't really like any of the characters, (except James and Kenji, who didn't even show up until near the end,) the romance waaay too in the way of the plot for me, and I didn't really like the writing style. I like metaphors, but in my opinion they should be this precious gem that you only pull out to spice up a sentence on special occasions, not every single time! You know? It just got so annoying. 😞

A Popular Book or series that every one else seems to hate but you love:

There are a lot of series that I'm not into that other people love, but it was hard to find one that I loved that other people seemed to hate. The closest one I can think of is this one. I was surprised that I really liked it since it's a romance, but I thought it was really cute and I enjoyed it. It's was written by YouTuber Zoella, who I do like, but I think a lot of people didn't like this book so much because when it came out because I think there was a lot of controversy about it because she used a ghost writer or something? I don't really remember all of the details, and this was before I started blogging, so I stayed out of the drama. 😂

A Love Triangle where the main character ended up with the person you did NOT want them to end up with OR an OTP that you don't like:

SPOILERS AHEAD!
SIGH. Where do I start? For the first question I explained some reasons why I really didn't like this book, but here I am going to elaborate on the real reason why I am SO GLAD I decided to not continue with this series. So buckle up because there is a rant coming.

When I finished Shatter Me I struggled with trying to decide if I should read the next book in the series or not, because I liked the way it ended with the set up of all of these cool new characters having powers like Juliette and this new district 13-esque setting.
But I realized, if I really didn't enjoy it up until like 70% of the book, then I probably wouldn't like the rest of the series if I struggled so much to get through this.
So, after deciding to DNF the series, my inability to leave things unfinished got the best of me, so I decided to research the internet for synopses of the rest of the series to see how it ended out of sheer curiosity and...

SHE ENDS UP WITH THE FREAKING VILLAIN?!

Are you kidding me? Warner is the villain! THE VILLAIN! WHY OH WHY does she fall in love with him after everything he did in the first book?!

Yes, if you read and liked this series, I know what you're thinking. From the synopses I read, apparently later they make out Adam to be this really abusive guy and Warner is magically justified for the things he did, like the test he ran on her with the little boy was just a simulation, and the solider he shot was abusive, and all of these things, so it's okay because he was trying to protect her and he's really misunderstood and just this really great guy.

But after just finishing reading the first book, I was just filled with absolute rage! You cannot justify all that so easily! Warner is a creepy emotionally and psychologically abusive jerk and Juliette was terrified of him. And RIGHTLY SO!! And I'm supposed to accept that lame 180 flip of character of Warner and Adam so easily?

In my opinion that is all so EXTREMELY messed up and really problematic and it just literally infuriated me! I am SO SO SO glad I didn't read the rest because I could not be able to deal with all that drama. 😡😡😡😡😡😡

Now I'm NOT HATING ON YOU if you like this series!! You are entitled to your own opinions! I just don't understand why people like Warnar. I just see too many serious issues with that that I can't just ignore, so I didn't enjoy it. Simple as that. 😕

A popular book Genre that you never read:


I never intentionally read horror. I don't understand the point of purposefully enjoying getting scared. I just really don't like really dark stuff.

A popular or beloved character that you do not like:

Everyone thought Zac was so swoon-worthy, but I never really liked him that much. I thought he was too arrogant and annoying. I actually liked Josh better, even though he's only in the first book. 😂

A popular author that you can't seem to get into:


I just can't get into John Green. I've never been interested in any of his books, hyped up as they are. I guess that's to be expected since I usually don't go for romance or sad books. I actually am finally interested in reading Turtles All the Way Down, though! 😄 The premise of mental illness really intrigues me, since I have anxiety and I haven't read many books with mental illness rep. Plus, it looks like it's going to be more about friendship rather than romance? So I'm all for that! 😄

A popular trope that you're tired of seeing:


Love triangles, (most of the time) and just sappy romance in general. 😑

A popular series that you have no interest in reading:

I'm SORRY okay?? I just wasn't allowed to read or watch it when I was little, and I just didn't really care because I was more interested in the Disney Channel kind of wizards. 😳 And now that I'm older I could read it, but it just doesn't feel right for some reason. 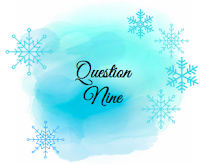 What movie or TV adaptation is actually better than their book?

Oh, don't even get me started on this one. The movie is nothing like the book, and usually that would annoy a bookworm like me, except that I'm glad, because the book was terrible! There were so many plot holes, the characters were annoying, the dares were stupid, and everything just made me really mad. I like how the movie seemed to fix it up a little and make it more interesting and the characters more likeable. 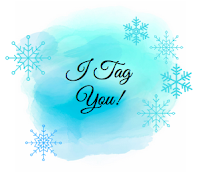 And anyone else who wants to! 😀

What did you think of this tag? Do you have any unpopular opinions? Feel free to do this post if you think it looks like fun! 😄

And if you haven't seen the new headers I made on my last post, I really need your help deciding which one to use! It will go where the title of my blog and the description is at the top of the page. Just comment whether you like A or B better, and tell me what you think! 😄 Thanks!