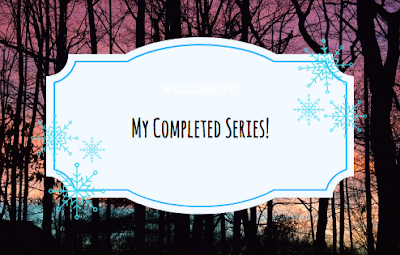 Hey guys! Today I am going to show you all of the series that I have read all of the books in in my lifetime. (Or as close as I can get using Goodreads. 😂) I got the idea for this post from Hailey in Bookland from a video she did a few years ago. 😊 So you should definitely check out her channel, she's awesome!

I went through my entire list of read books on Goodreads, and I found books from 15 series that I have completed so far. It's not a lot, (and most of them are kids' and middle grade books that I read years ago) but it's something. Now that I look at this list though, I know I definitely need to finish more YA series I started. 😂

The Chronicles of Narnia by C.S. Lewis.
Okay, I'm kind of cheating with this one, because I'm pretty sure I only saw the movies for The Lion, The Witch, and The Wardrobe and Prince Caspian, but I can't remember. It was a long time ago. 😂 I'm planning on rereading the whole series at some point though, so I will make sure I have actually read all of them then. 😜

The Missing Series by Margaret Peterson Haddix.
I LOVED this series! I started reading it when I was 12, and I think I only recently read the last book last year because it wasn't published until like 2015 I think.

Misty of Chincoteague by Marguerite Henry.
I read this series when I was around 8 or 9 when I was really obsessed with reading books about horses. Didn't ride them. Didn't want to. Just wanted to read about them.😐

The Sisters Club by Megan McDonald.
This was a cute series. I think reading it was where my tendency to write characters with big complicated family dynamics stemmed from. 😂 As an only child I was very fascinated with sibling relationships.

The Cooper Kids Adventure Series by Frank E. Peretti.
This was a really cool series. I was first introduced to it by my 4th grade teacher who read the first and second books to my class.

Peter and The Starcatchers by Dave Barry and Ridley Pearson.
THIS SERIES IS THE BEST PETER PAN RETELLING EVER! Okay, so other than The Neverland Wars, which I read last month, it's the only Peter Pan retellings I have read, and back then (I must have been in 4th or 5th grade) I didn't even know what retellings were, but they were SO GOOD! I totally want to read them all over again because I don't think I appreciated them enough the first time. 😄

The Shadow Children Series by Margaret Peterson Haddix.
This is by the same author of The Missing series, which I loved, but this is her earlier series which she was better known for, but I didn't get around to them until high school. I really wanted to catch up on them and see what all the hype was about, so one summer I marathoned them all in like a week, which I never do, but I was determined to get through them all! I really liked them, though I wish the plots were a little more developed. But I'm glad I read them when I was a little older, because if I read them when I was in middle school I probably would've been too creeped out. They can be a little dark, but I was a pretty sensitive kid. 😜

The Princess Plot Duology by Kirsten Boie.
I liked the first book, but I think it would have been better off as a stand alone. I think I was a little too grown out of it by the time I read it's sequel.

The Titanic Trilogy by Gordon Korman.
This series is AMAZING! I loved them so much I daydreamed nonstop about them being made into a movie when I first read them. I wish they were so much longer, though! All three books are only around 170 pages. 😫

The Hunger Games by Suzanne Collins.
Of COURSE I've read this trilogy. 😉

Divergent by Veronica Roth.
And this one. Though I didn't love it as much as I loved The Hunger Games.

The Gallagher Girls by Ally Carter.
This will forever be one of my favorite series EVER. A prep school that is secretly training kick butt teenage girl spies! It's like a whole school filled with Kim Possibles! But WAY cooler. 😄

Heist Society by Ally Carter.
My friend LOVED this series and pushed me to read them. I liked them too, but I still like The Gallagher Girls way better. 😂

The Teardrop Duology by Lauren Kate.
I liked this first book, except for the creepy romance, but the sequel was terrible. 😫

The Testing Trilogy by Joelle Charbonneau.
I LOVED this series when I first read it! But it's not too popular because a lot of people think it's just generic dystopian. But I guess I was lucky to have read it before I got too into dystopian so my opinion was still pretty unbiased. 😂

Okay, so that's it for all of my completed series!

But I have one more thing before you go: I made these two headers using Canva and Freepik to put on my homepage, (it'll go where the blog title and description is at the top of the screen) but I can't decide which I like better! They are pretty similar except for the font and the placement of the snowflakes are a little bit different.

I love both headers so much, so I really need your help deciding! I want to know your thoughts! 😊Just comment whether you like A or B better, and tell me what you think of this post!
And tell me what series have you completed? (Probably a lot more than me. 😂)

Thank you for reading and I'll see you back here on Saturday! Bye! ♡