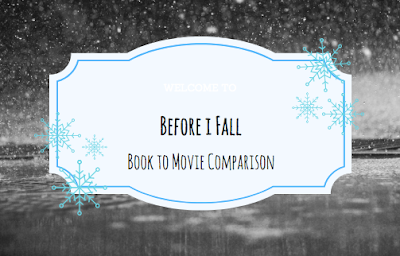 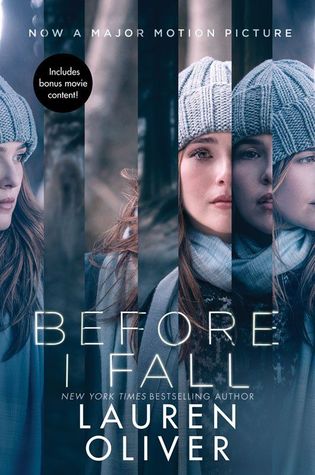 Hey Book Bloggians! Today I am FINALLY getting around to my waaaaaaay overdue book to movie comparison review of Before I Fall by Lauren Oliver. There's no sense in procrastinating this any further, so let's just get into it! 😂 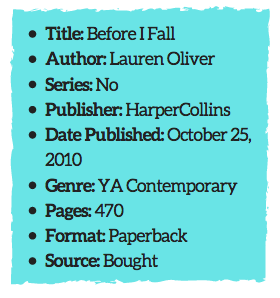 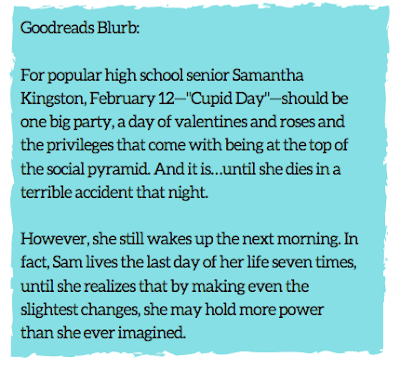 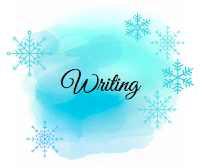 There wasn't much about the writing style that stood out to me. I've heard that some people had a hard time trying to get through this book because it's repetitive, but that honestly didn't really bother me at all, I think that's kind of the point of the story. I think enough things were different every time Sam relived her last day that I didn't get bored.

I liked the writing in the movie. In my opinion, they stayed pretty close to the book, compared to some other book to movie adaptions. (ahem-Allegiant) wow sorry that was sassy. I think they did switch around the order of some of the scenes, but considering the plot of this particular story, I didn't think it mattered as much, as long as they included the most important scenes and didn't change the overall plot drastically.

I don't feel like there is much I can say without giving anything away, but I like how the plot, though repetitive, played into Sam's character development, even though she was living the same day over again and everyone else stayed the same. It was interesting to see. Certain things needed to happen for Sam to see the truth and make the decision that led to the finale. Same goes for the movie.

The setting doesn't really come into play that much in the book. I think it could be set anywhere really and it wouldn't make much of a difference.

For both the book and the movie, most of the characters frustrated me. When I first started reading the book, I hated Sam and all of her friends. They were obnoxious and just not the kind of girls that I would personally want to be friends with in real life.This book was kind of hard for me to get through because of that because I think I saw some of myself in Juliet, and it was hard for me to read about all the things that Sam and her friends were saying about her. But as the story goes on I did come to like Sam more towards the end, but it's really hard not to spoil too much.

There were definitely some things I didn't like about this book, but it mostly just stemmed from the characters and their decisions, and I could go on a whole rant about this one scene involving Sam and one of her teachers, (and I'm SOOOO GLAD they actually did cut it from the movie) but UGH I really don't want to spoil too much. Let's just say it made me mad.

There were obviously some details that they had left out, as Hollywood tends to do, but comparatively to a lot of other book adaptations I have seen lately, I was pleasantly surprised with how close they did stay to the book. Out of all the book adaptations I watched last year, this was definitely the best. It's worth seeing at least once.

Overall I did like this book and the way it ended, although I was very sad and frustrated at a lot of things. It's still taking me awhile to sort out all my feelings about it, but it is a very powerful book and has a great message. I think this is a book everyone should read at least once in their life.
Movie:

I'm glad they stuck pretty close to the book, at least more than I was expecting, and of course there were some difference, but not enough to make me think they completely ruined anything, though I recommend (as with any adaption) to read the book first to get the whole story.

What's some of the best (or WORST) book to movie adaptations you've seen? Did you like Before I Fall? Are you as emotionally conflicted about it as I am? Do you agree with some of my points or do you have some different ones? What do you think? Tell me in the comments!