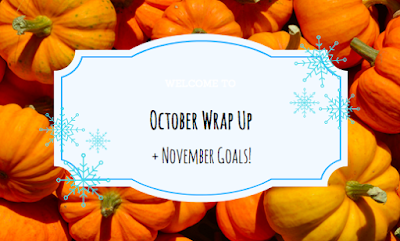 
I found some time away from Nano today to bring you my October wrap up, so here it is! 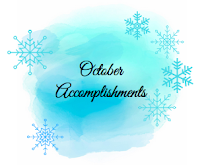 I’ve finished all of these except for Jane Eyre. It’s taking me so long to get through it though because it’s just so dense and I have to be in the mood to read it. 😟 I’ve only gotten like a quarter way through it. I have one more chapter left of the first part, but I put it down for a little bit so I could focus on other books that I could get through faster so I could catch up on my Goodreads goal before Nanowrimo.

I’m proud of myself I actually finished both The Here and Now and Metaltown! I actually did more reading this month than I expected since I was prepping for Nano and I was still kind of in a slump. The only one I still have to finish is Red Queen! 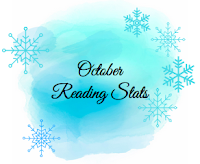 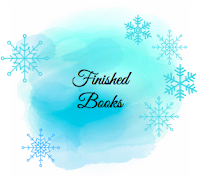 This book was cute. It's a graphic novel which I don't usually read, but back when I was working at my high school library I read the other books by this author to pass the time when it was slow and I actually enjoyed them so I decided to pick this one up.
I was surprised at how this book made me a little bit emotional. I felt like I could relate to Cat's anxiety and I admired Maya's character and how she was so young but not afraid of death, unlike Cat. I also like the fact that the author dedicated this book to her cousin, who died young.

I listened to this one on audio book and I really enjoyed it. I liked how the reader did all the accents and I like how the fantasy elements in this book surprisingly didn't feel entirely ridiculous or out of place. I thought it did a good job of explaining the science behind the magic, hence, the "Apothecary." I also loved the setting of 1950's London and all the apprehension of communists and spy stuff. It added to the book and didn't seem to overwhelm the fantasy elements or vice versa. Ugh and that cliff hanger ending! I was just kinda like:

I really liked this book. For a stand alone about time travel, I feel like it was actually wrapped up pretty nicely. I liked how it was kind of a contemporary, a sci-fi, and a murder mystery all in one. It was a nice surprise. I liked's Prenna's character, and I'm glad the romance didn't take a front seat to the plot as much as I was expecting, though it did feel kinda insta-lovey.

Oh boy. What should I say about this book? I was really hoping to like it, but I was pretty disappointed. The author said it was inspired a little bit by Les Miserables, and one of the main characters was her tribute to Eponine, which got me really excited, but it just kinda fell flat for me. I didn't find many of the characters particularly likeable, it felt like it took a long time for the actual story to get going, it all just kinda seemed pointless, especially with the way it ended. I didn't like how the antagonist wasn't really even brought to justice like I was hoping, and also I feel like the multiple POV chapters were a little unnecessary since it was third person anyway.😕
A couple things I did like about though, was Lena's character development towards the end of the book, and the themes of friendship, loyalty and standing up to oppression. Unfortunately the rest of the book didn't seem to be as good as it could have been.

I actually really enjoyed this book, though for a murder mystery I think it might have been a little mediocre. They only give you two suspects to who the murderer could be, and it ends up being one of them anyway. I just thought it might have been better if there was a third party that did it that no one saw coming to make it a little more...I don't know, good?
BUt even in spite of that I did second guess myself of who I thought the killer was, and I was engaged and it was still a good story.
I liked how the whole oracle prophesy thing surrounding the main character, Aria, didn't feel as strange as I thought it would; it felt surprisingly natural. I really liked Aria's character and I like how connected to music she is. The meaning of her name, she listens to music every day to block out the world so she can cope with the everyday and I think even all the chapter titles were song titles, or at least a reference to songs. If you're looking for a murder mystery that isn't too scary, you should definitely give this one a try. 😉

This was the second book in the Dorothy Must Die series, and I did enjoy it, though maybe not as much as I did the first one. I loved reading about the world building of Oz and all of the vivid descriptions, and the plot really makes me want to find out what happens next (and of course it had to end on a cliff hanger just like the first one, ugh! 😫) and I like how the characters are still pretty likeable, even if they're not all good. Though, I don't like how close to the dark side Amy is getting, which is making me a little apprehensive, but I'm still going to read the third book anyway because I need to know what happens next! 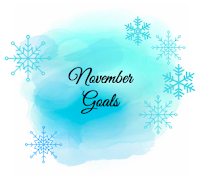 I'm planning to read Pretenders and Let it Snow for a couple of readathons this month, so hopefully I can get through them quickly.
And, if I get around to it, I want to read The Mother-Daughter Book Club since it's short and my Nano project is a little bit inspired by this series; like, kinda the way it was written so I'm hoping to read it to help keep me in the head space of my Nano project. 😊
And I'm going to at least try to make more of a dent in Jane Eyre. As long as I finish it before December 31, we’re good.😜


Get the book store job?


Try to be more independent?


I don’t know how this month is going to go, but I’ll try.


Just try not to completely forget about blogging during Nano, that’ll be an accomplishment. 😜 I’m hoping to still do Top Ten Tuesday, so depending on my schedule, I’ll still be posting at least once a week.

Are you doing Nanowrimo? How are your projects going? What is your current word count? I’m at 4,638. (a little behind, but I should be able to catch up soon.) 😉 Have you read any of the books I mentioned? Which one is your favorite? Happy Nano-ing! 😄