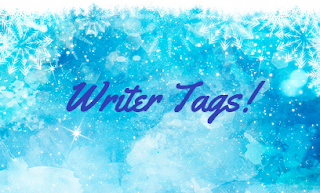 Hey guys! I’ve seen a couple writing tags going around lately, so I thought it would be fun to participate in them and show more of the writer side of me than the reader/movie watcher side. 😉 I’ve decided to do two, since they are both pretty short and only a couple of their questions are kind of similar.


I haven’t been tagged by anyone to do these, and I’m not sure where they originated, but The Writer’s Ink Challenge I got from Kellyn at Reveries, and The Writer’s Tag I got from Mary Katherine at Sarcastic Scribblings. They both said anyone who is reading their blogs can answer the questions if they want, so here I am. 😀 I will have a link to their blogs after each set of questions if you want to check them out.


Well, technically I guess I was around 2. My mom caught me drawing on a long string of old fashioned computer paper, and instead of some usual random scribbling, apparently I drew boxes and wrote an actual story out in chronological order. I guess technically this isn’t writing, but I guess that’s when my mom first realized that I had a talent for storytelling, since I was basically making storyboards even back when I didn’t know what storyboards were.


Not really. When I was little I wanted to be a ballerina. But by the time I was 11 I was bored with it, so that didn’t happen. A couple of years later though, my mom took me to a couple of professional writer’s conferences and I think that’s when I fell in love with writing and I decided that that was want I wanted to do. I already had a large collection of notebooks full of characters and story ideas that I had started years before, but I mostly just did them for fun. Going to those conferences inspired me to write an actual book for the first time, just to see if I could finish it. A year later, it was only 96 pages long, but at least I accomplished something. 😜


Because it is easier for me to express myself on paper or typing than out loud.


Well currently, it’s mostly contemporary fiction. I did start a sci-fi story, an action-ish story, and a story that I guess is magical realism…I think? But I definitely want to try all types of fiction except for horror and maybe romance. I’m excited mostly in the future to try fantasy and historical fiction. 😊


Well I would feel guilty if I didn’t say my Mom, especially with Mother’s day coming up, because she has always been so supportive of my creativity, and also she did take me to those conferences to learn more about writing, and if she didn’t I don’t know if I would have wanted to be a writer when I grew up. 😄 And I guess God, because He gave me a talent for writing, but if we are talking about inspiration wise, I get it really anywhere, from something I hear in conversation, to something I see on the internet or TV, or by reading other books, or from experiences in my own life.


Not really. I’ve written a few, but I don’t really enjoy it. I prefer having complicated, detailed, drawn out plot lines with interesting characters that you get in novels. 😆That doesn’t mean I don’t appreciate it though. 😊 Although that strange unspoken rule that you have to snap instead of clap when someone reads their poetry out loud seriously annoys me. Whyyy? I don't understaaaaand! 😖


Once when I was in sixth grade I think, I went over to a friend’s house and for some reason she wanted to help me write a book. We came up with a character and a really shallow outline for the first chapter I think…and ended up writing two sentences and never touched it again. 😐


Well, I thought I was writing in first person present tense, but apparently I’ve accidentally mostly been writing in first person past tense this whole time. 😳 I’ve heard other people find it easier to write in third person, but I like writing in first person because I spend so much of my time living as my characters in my head that I feel more connected to my story when I write in first. When I write my fantasy series that I want to write in the future, I think I might try to do it third person with an omnipresent narrative or whatever it’s called, because it’s going to have a lot of characters. Plus, it might be a fun challenge…or it might just be a challenge. We’ll see. 😓


I kind of already talked about the genre and style in the above tag, so for topics, I don’t really know, whatever I think would be fun to write about I guess. It also depends on whatever genre I’m working on at the time too. I think my novels are all going to be very vast and diverse from each other.


As I mentioned before, technically my whole life, but I think the first time I actually started to be interested in writing was when I was 8 and my mom gave me my first “theme book.” Or that’s what she called them at least. It was really just a spiral notebook with a Care Bear on it. 😜 But I was supposed to use it to write down any ideas for a story I wanted to write in it, so I started with that one and my collection of theme books grew and grew because every time I would start developing a new book or series I would have one special notebook dedicated to each Idea so I could keep them separate and organized. Then, of course, later when I was 13, she took me to my first writer’s conference and I think that’s when I officially decided to turn writing into a career one day. 😀


Again, as I said above, I’m pretty shy, so it’s easier to express myself through writing than in real life. I tend to talk too quietly and mumble or over explain things, so I feel like it’s a lot less pressure to write something out than to speak. That’s also why I decided to start a blog instead of go on YouTube and make videos like it seems everyone is doing lately. Plus, writing is obviously fun for me. I like creating a bunch of diverse characters whose personalities are completely different from each other, and put a tiny piece of myself into each one of them.😊


I don’t know, I don’t really have a set schedule, but I have noticed sometimes on a really nice sunny afternoon I feel inspired to stay inside and write…which makes no sense since I should want to spend time outside, but I don’t know. I like having sunshine streaming through my window while I write. And since I’m an only child there’s a lot of nice, lazy, quiet afternoons. I’m even writing this post in an afternoon. 😜 But sadly I get most of my really good ideas really late at night when I’m trying to sleep, or when I’m in the middle of trying to concentrate on schoolwork.😩


5.    What are the parts of writing that you love? What are parts you hate?


Parts that I love are creating characters and plots and world building and detail and…yeah you get it. But, I don’t know, I guess that’s really fun for me.😀The parts I hate though are…actually writing. I know, that sounds bad. I love writing, but I don’t like getting stuck staring at a blank screen and actually having to type all of that to get to your word goal by yourself. Sometimes I wish somebody could do it for me but then it won’t really my story anymore, you know? Does anyone else have that problem?


Heh heh, good question…I don’t. 😁 I mean, not really I guess. I get bored pretty easily with some of my stories and I usually end up starting a new one and they never get finished. 😞 But, I’m slowly working on being disciplined…kind of.


7.    Are you working on something at the moment?


Better question would be what am I not working on? Technically I have five books that I actually started an actual manuscript for, but I have so many that are in the process of world building and research and all that fun stuff, and then I’m always daydreaming about all of those literally 24/7 so yeah…I guess you could say I’m “working” on…something.😜


Well I wanted to finish the first draft of a novel I worked on for Camp Nanowrimo last year that I thought I was going to finish during Camp this April, but that didn’t happen. So maybe I’ll try to finish it before Camp in July but I highly doubt that’s going to happen, so I might just finish it for Camp in July or work on something else, or I might not end up doing July Camp Nano this year at all...I really don’t know yet. I really need to work more on a story that’s really important to me that I’ve been thinking about for years but have barely done anything with, I want to finish the second draft of the first book in a series that I finished last year, I want to start on the second book in that series, maybe I’ll do the real Nanowrimo in November but I doubt it since I’ll be back in school, I want to read a bunch of books over the summer so I can blog about them and build up my blog more and try to be more consistent, and I want to start journaling more…so yeah, that’s a lot. And, probably absolutely none will get done. 😜 Oh well, I’ll at least try.😊


Well, that’s it for my writing tags! I hope you enjoyed them. 😃 Be sure to head over to Sarcastic Scribblings and Reveries and check out these tags on their blogs, and if anyone wants to do them yourself, I tag you!😀