Beauty and the Beast SPOILERY Review! 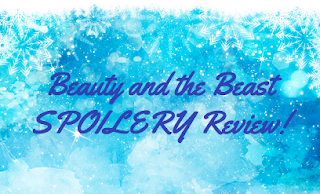 Hi, book blogging world! I’m back!
As we are nearing the end of April’s Camp Nanowrimo I seriously hope you all got closer to your goals than I did, because April chewed me up and spit me out. 😁 I thought I would actually do better than I did last July because I was just finishing the story I started then and instead of a 50,000-word goal I just went for about 21,000…but yeah that so did not happen. I unfortunately had zero motivation to write anything including my blog so I’m sorry about that. But, I’m back from my hiatus and hopefully I will be able to post more regularly soon.
Now, on to Beauty and the Beast! 😄


I know, I know, I’m kinda late on this bandwagon, (like always) but I waiting to go see it with a friend when it came out and at the last minute both of our schedules kinda fell apart so we had to reschedule and I finally got to see it today and it was so worth the wait!

Okay, I’m sure I’m one of the last people to have seen it so there may not be many people who care about spoilers since it came out a month ago and pretty much everybody’s seen the original cartoon and it’s still basically the same story, but in case you are too broke to see it (like me) and/or you are depending on someone else to take you and you are still trying to work out timing (was also me) OR you just want to wait until it comes out on Blu-ray or Netflix or whatever and you CARE about spoilers:

Okay, people who don’t give a crap about spoilers still with me?

No, seriously. I really loved everything I don’t know if it was just that good or if it’s because I’ve been waiting a really long time to see it, but this is definitely going to be one of my favorite Disney movies. I even liked it more than the 2015 Cinderella, and I was really surprised at how much I liked that.

But really, I loved the music, the costumes, literally every moment was so awesome and so beautiful, I was so excited I think I scarfed down all my leftover Easter candy I smuggled into my purse all during the first half of the movie. (who knew Nerds and buttered popcorn were such a great combo?)


But, as much as I want to ramble on and on and talk about literally every detail, that would take forever, plus it might not make any sense so, here is a calm, organized list of some highlights I took note of: 😜


I thought that was hilarious.


There’s honestly not much I didn’t like about it, as you can probably tell, but I decided to add these little points even though they probably aren’t that much of a big deal. Also, it’s not that I didn’t like them or I thought that they took away from the movie or anything because they didn’t, but I was just a little confused.


Anyway, the movie absolutely awesome and if you haven’t had a chance to see it yet, you totally should if it’s still there in your area because seeing on a big screen is so worth it!


I’ll leave the link here if you want to check it out:

Okay, sorry for the long post, so as a reward here’s a cute gif of Chip blowing bubbles: 😊