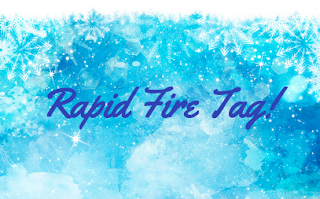 Hey readers!
I’m so sorry it’s been a little while since I posted but we have been so busy moving out of our house for the past few days that I haven’t had any time to really even think about blogging. 😖 But, thankfully we are officially moved out now so the good news is I will soon have my books back so I will have some reviews coming your way soon! 😄
I know I probably shouldn’t do two tags in a row, but since I have been having some trouble posting frequently lately with being so busy, I also kind of lost my motivation to blog so I decided to do something quick and fun just to get something out there for to you enjoy and to get inspired again.😊

So today I will answer questions for the Rapid Fire Book Tag:🔥

1.    ebooks or physical?
Definitely physical. I think having a wall full of bookshelves is much more impressive and pretty to look at than having them all on a little screen, even if it saves space.

2.    Paperback or hardcover?
Hardcovers. Especially if the cover is gorgeous, I just have to get it in hardcover because I think if it’s that beautiful, I think it just deserves to be in hardcover. If there’s a book where I don’t like the cover design as much, I’m okay with getting it in paperback. Plus, I like hardcovers because paperbacks can get damaged more easily.

3.    Online or in store shopping?
Really both, put if I had to pick one I’d go with online. I of course love the experience of going to a bookstore, but because my hometown doesn’t have a lot of good bookstores left and my nearest Barnes & Noble is an hour away, 😩 I do most of my book shopping online. I love the feeling I get when I go to the post office and there is a big box of books I specifically picked out waiting for me. It makes a normal day feel like Christmas! 😃Plus, sometimes when you go to a bookstore looking for a specific book, they might not always have it available in stock, so that’s another reason I like shopping online is because you can quickly and easily search a bunch of different websites for the book you want, especially if you want it in a certain edition or something.

4.    Trilogies or series?
I don’t know, I feel like I’ve read more trilogies, but I don’t really think I need to pick one over the other. As many books as the author decides their story needs, that’s fine with me. The more books the merrier. I’ll read them all.😉

6.    A book you want everyone to read:
I’ve probably mentioned this before but my most recent favorite is Steelheart by Brandon Sanderson. I know I have only just started reading the second book but seriously, this trilogy deserves to have a Hunger Games-Divergent-Harry Potter sized fandom! I’m so sad and frustrated that it doesn’t, at least not that I know of, but literally nobody talks about this book and I have so many feels and nobody to talk about it with! Does anybody else have that problem? No? Just Me? Okay. (goes and pouts in a corner.😞)

7.    Last book you finished:
I think it was Lost in London by Cindy Callaghan. This is a middle grade book, but it looked cute and interesting so I read it anyway.

8.    Last book you bought:
It’s been like, months since I’ve been able to buy books, 😭 but I think the last one I bought might have been Red Queen by Victoria Aveyard? Of course in Hardcover because that cover is awesome.

9.    Weirdest thing you’ve used as a bookmark:
I don’t know, my arm? But only for like, two seconds.

10.Used books or new books?
Definitely new. I don’t want to be picky, but I just like the look and smell of new books. But, I will probably get a used book if it’s in really good condition.

11.Top Three Genres:
I’m not sure, but I think the most of what I’ve read is probably contemporary, dystopian, and maybe historical fiction?

12.Borrow or Buy?
Buy. I’ve said before I love the idea of building up my own personal library. 📚😍

13.Characters or plot?
Either works for me, but I guess I’m more inclined toward the plot, especially if I happen to be reading a romance. Literally the only thing that will get me to read a romance is if there is an interesting main plot. I’m not too interested into the whole lovey-dovey stuff going on with the characters, so if that is the main focus of the book, that’s a deal breaker for me. But, if I’m already invested in the plot and I end up shipping the characters along the way, that’s great, but I won’t normally ever pick up a romance just for the romance.

14.Long books or short?
It doesn’t really matter how big the book is, I will probably still read it at a glacial pace.😂

15.Long or short chapters?
I think I like chapters that are kind of in between. Not too long where if you don’t have a lot of time to read it’s hard to find a stopping point, and not too short where I fly through the book and it makes it really hard to stop. I almost never read a book in one sitting, I like to make them last.😜

17.Real world or fictional world?
Fictional world, duh. Have you seen all the crap that goes on in this world?😱

19.Do you ever judge a book by it’s cover?
Sadly, yes. But I always read the synopsis on the back to make sure I actually am interested in it before buying it. I’ve never bought a book solely on the way it looks. That would just be a waste. 😕

20.Books that make you laugh or cry?
Laugh. I tend to avoid books that make me cry. That’s why I never jumped on the Fault in Our Stars bandwagon a few years ago. Plus, it’s a romance and I didn’t want to read a book just because everyone else was.😒

21.Movie or TV adaptions?
Movie. I haven’t seen many TV adaptions of books I’ve read, but I know they tend to not be very good. Also, with franchises like The Hunger Games and Harry Potter and all that, books being made into movies rather than TV shows just seem like a more familiar concept to me.

22.Movie or TV show you like better than the book:
The Princess Diaries. I loved the movies when I was little, so when I was a little older I decided to read some of the books. Big mistake.
It’s not that the books where bad or anything, it’s just that there were so many differences and I was already too emotionally attached to the movie versions. I was so used to the movies, that I hated the books and it just felt like a waste of time when I pretty much already knew the story and there were other books I wanted to read more.

23.Recommend an underrated book:
I would go with Steelheart again, but I decided I should pick something else. So, another series I think deserves a large fandom is The Testing Trilogy by Joelle Charbonneau. I marathoned this series in one weekend a couple years ago which I never do on a regular basis and I loved them so much that I made my school librarian that I worked with order them so other kids could read them. 😃 It’s a dystopian about a girl named Cia who is chosen to be a candidate for The Testing, a rigorous program and only shot at getting a rewarding college education and career. The day before she leaves home however, her dad, who passed The Testing and went to the University when he was Cia’s age, hints that The Testing may be more deadly than simply sitting in a classroom with a pencil and piece of paper.
This would be a great book to read if you loved The Hunger Games or Divergent. In my opinion, there were some elements in this series that reminded me of these other more popular dystopian trilogies, but I still think it was very good and had its own unique plot line that was all it’s own, so if you want to get back into the dystopian genre, this would be a great one to read.

24.Series or Standalone?
Same with trilogies or series, I’m fine with whatever number of books the author thinks they need to write. If I’m enjoying the story, then why not extend it? But even if I love the story of the standalone, if it has a great ending then I’m fine with it ending there. It really doesn’t make any difference to me. :)

So, that was the Rapid Fire Book Tag! I hope you enjoyed it. :) I promise in the future I will start posting more consistently and you will have new content such as book reviews and unboxings coming very soon!